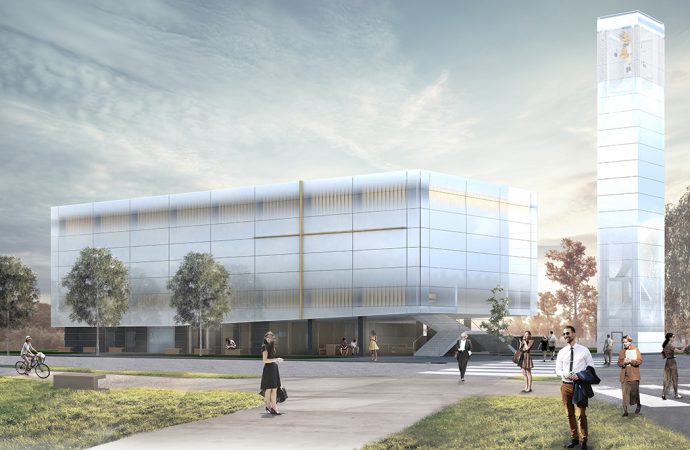 The proposed church generates a focal point of the newly planned urban neighbourhood Nowe Zerniki. The church tower forms a focal point of the newly planned culture and education axis. The volume of the nave is prominently concluding the south end of the esplanade with the priest’s home modestly behind it. The materiality of the church is also generating an important urban element in wintertime and at night services, when the translucent facades of the church, enlighten the neighbourhood. In day time the North façade generates a fragile translucency.

By the designed building’s volume we wanted to close the main green promenade and give it a special architectural character. This move make the hole urban concept more defined and in human scale, more cosy for the casual pedestrians and local residents.

On an urban level the church serves as social community center on one hand and as an individual transition space from the urban life. The concept reflects this transition by the entrance into the nave from below. The flow of space underneath the church’s nave has a very inviting character. The flexibility given by this place, allows various scenarios to take place in the social life of the neigborhod, where the profane and the sacred meets. The church garden, is a semi-public green space between residential area and public areas.